ISLAMABAD: The Capital Development Authority (CDA) on Friday awarded a contract for the finalisation of the design and alignment of the proposed southern bypass from Rawat to Bhara Kahu. 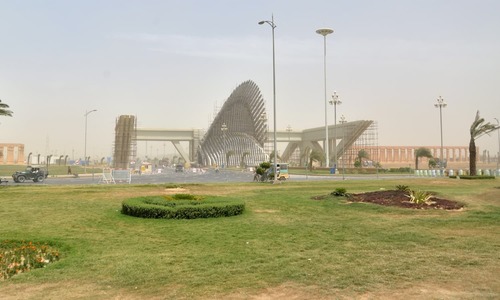 Chaired by Chairman Amer Ali Ahmed, the CDA Board at a meeting approved consultancy for the bypass project to be conducted by the military’s Engineer-in-Chief (E&C) Branch. Under the contract worth Rs10 million, the E&C branch will complete the alignment, design, and survey of the road in three months.

An officer of the CDA said since E&C was a government entity and specialized in road works, it was engaged to help the CDA.

The 30 to 40 km long and 600-foot wide road will begin from Rawat and connect with Murree Road near Bhara Kahu before crossing the Defence Housing Authority (DHA), Nilor, and Tumair areas of Zone-IV and V.

Sources said the E&N branch also gave a presentation to the CDA recently on the road’s proposed alignment.

Once built, the road will help reduce traffic on Murree Road, Kashmir Highway, and other major arteries, as traffic to and from Kashmir will use the new highway to reach G.T. Road in Rawat.

Residents of Zone-IV and V, where a number of housing societies have already been established, will also use the road, reducing the burden on other roads, the official said.

In November last year, the cabinet while approving an interim report prepared by a commission formed to revise Islamabad’s master plan had approved the construction of the bypass road. The CDA official said in the future the new road will be connected with the proposed Margalla Avenue, which starts from Sangjani and ends near Bhara Kahu.

The proposed Margalla Avenue divides Zone III to its north from Zone I and II to its south. Under the master plan, it would begin at the G.T. Road near Sangjani, pass through the foothills of the Margallas to Constitution Avenue, and onwards to Bari Imam and Bhara Kahu, where it would connect to Murree Road.

The CDA board also decided to regularise services of over 700 daily-wage employees on the department recruitment committee’s recommendation.

The board also approved a budget for the Metropolitan Corporation Islamabad (MCI) mainly to pay salaries to its employees for the next three months.

The MCI, which was formed in 2016, has over 10,000 employees. So far, the CDA has been paying salaries to the MCI employees as the corporation lacks funds.

The board also approved the post of deputy director-general enforcement to play a role in the removal of encroachment from various parts of the Islamabad.

Several cases related to the restoration of plots were also discussed and the board decided to refer one of the cases in G-9 to the Federal Investigation Agency (FIA).