KARACHI: The Centre has earmarked Rs10.5 billion for the rehabilitation of the first and second phases of Karachi Circular Railway (KCR) such that it can be built in the style of the Mainline-1 (ML-1) railway project, said project director Ameer Muhammad Daudpota on Tuesday. 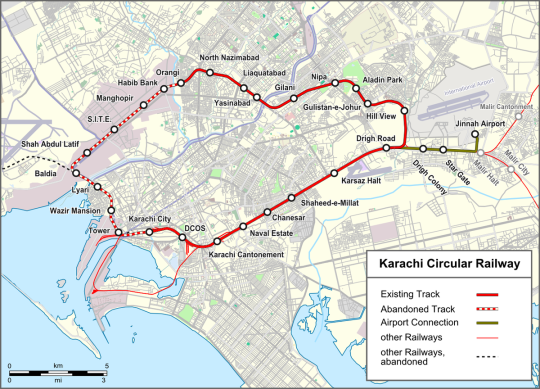 The ML-1 project, worth $6.8 billion, includes the dualization and upgrading of the 1,872-kilometre railway track from Peshawar to Karachi and is part of the China Pakistan Economic Corridor (CPEC). It was approved earlier this month.

After the rehabilitation, in its third phase, KCR would be given the status of a rapid mass transit system under a public-private partnership, stated Daudpota. In the first phase, the railway track from City Station to Orangi is to be restored within the stipulated time as directed by the Supreme Court, he added.

According to the project director, the track from City Station to the SITE area has been restored while the track from SITE to Orangi is yet to be completed. The latter too will be restored soon, he claimed.

He further said that there had been no major obstacles in the rehabilitation process of KCR. Underpasses and flyovers, which were the responsibility of the Sindh government, would be constructed in the second phase of the project, he added.

Daudpota opined that the revival of KCR would provide citizens with improved travel facilities, particularly those who work in the SITE area. The project was a priority of the Pakistan Railways, he insisted, adding that the federal and provincial governments were on the same page with regards to KCR’s revival.

Earlier this month, annoyed at the delay of KCR beyond the project’s deadline, the Supreme Court directed officials to ensure the intra-city rail service was operational by the end of the year. During the hearing, the railways’ secretary had informed the apex court that obstructions were caused due to the Green Line bus rapid transit project.