Construction of Kamran Tessori’s Tejori Tower delayed Due to Disputes.

The construction work of Tejori Tower in Karachi’s Gulshan-e-Iqbal has been stopped for a week after the Pakistan Railways claimed the land on which the project is being constructed belongs to it. This landed the matter in the Sindh High Court for the second time in four years. 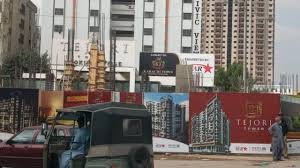 Tejori Tower or Tejori Heights are the same projects. It is a residential project site located on main Sebha Akhtar Road in Gulshan-e-Iqbal Block 13-D near Hasan Square. The project is named “Tejori Tower” not “Tejori Heights” but there’s some confusion surrounding the name.

The project is owned by Karachi Town Builders & Developers. The proprietor of the company is Javed Iqbal Qureshi, who is the father-in-law of Kamran Tessori, a politician and businessman. Tessori is also a partner in his father-in-law’s construction business.

The Pakistan Railways registered an FIR against Tessori at the Railways Police Station in South District on November 20. The FIR stated that Tessori of Tejori Heights had encroached upon Pakistan Railways land measuring 2,783 square yards.

He is constructing an unauthorized multi-story plaza for commercial and residential purposes illegally and unlawfully, according to the FIR, which has been lodged under the Federal Government Land & Building Ordinance, 1965 read with an amended provision of 1984.

Tessori says the project is spread over 2,800 square yards and the land was purchased from the Board of Revenue. A plot adjacent to the project site has a Survey No 190 and belongs to the Pakistan Railways.

According to him, the Pakistan Railways deputed its police force at the project for the last week to create panic among people who have purchased apartments.

“This is unfair as the case is in court and has yet to be decided, but the police have stopped the construction work forcibly,” he decried. We have an approved layout plan by the Master Plan Department and a forwarding letter from the land-owning agency, Tessori said, adding that the court has issued a contempt order against the Pakistan Railways authorities for deploying their police at the project site.

He says the survey superintendent conducted the site’s field survey in the presence of the Sindh government’s mukhtiarkar and supervising tapedar and didn’t raise any objections over the plot survey number.

Survey Superintendent Anwar Ali Panhwar in his letter to the Sindh High Court stated that the field survey staff reported that the site inspection of Survey No 188, 189, 190 and 653 of Deh Gujro was made on November 4 in the presence of the Gulshan-e-Iqbal mukhtiarkar, along with the supervising tapedar and a representative of the Pakistan Railways.

The field survey staff furnished a report along with the site inspection plan with the accurate position of land survey numbers 188, 189, 190, and 653.

“The NOCs were issued under the name of Tejori Tower, not Tejori Heights,” he said, adding that the SBCA has only one NOC permission case for Karachi Town Builders & Developers.

But Karachi Town Builders & Developers used the name Tejori Heights in their project advertisement instead of Tejori Tower. The SBCA issued notice to the builder over this, who accepted their mistake and assured the Authority that it wouldn’t happen again.

The SBCA director said the design department has written a letter to SBCA Gulshan-e-Iqbal Town about the status of the project’s building plans.

SBCA Gulshan-e-Iqbal Town Director Muhammad Raqeeb told SAMAA Digital that the project building plans are intact and valid. The matter is, however, still in court and has not been decided yet.

“If the court issues a verdict against Karachi Town Builders & Developers, then the SBCA will take action against the project and will either seal or demolish the structure,” he explained.

The SBCA’s director of the town planning and regulations department said the Authority issues NOCs to any project after receiving an approved layout plan from the Master Plan Department and a forwarding letter from the relevant land owing agency.

The project site in-charge Muhammad Aslam said people who have purchased apartments in the Tessori Tower project visit their office every day because they are worried about their investment.

He confirmed that Karachi Town Builders & Developers planned to launch another residential project by the name of Tejori Heights, but it isn’t possible to do that now.

Aslam said all the apartments in the project were booked in 2019 and the construction work was underway before the Pakistan Railways entered the picture.

He confirmed that construction work had been stopped because the Pakistan Railways Police have been at the scene for the past week but said people would get possession of their booked apartments by 2023.