ISLAMABAD: Prime Minister Imran Khan on Thursday directed the authorities concerned not to conduct any anti-encroachment operation in Karachi till the provision of alternative shelter to deserving dwellers. 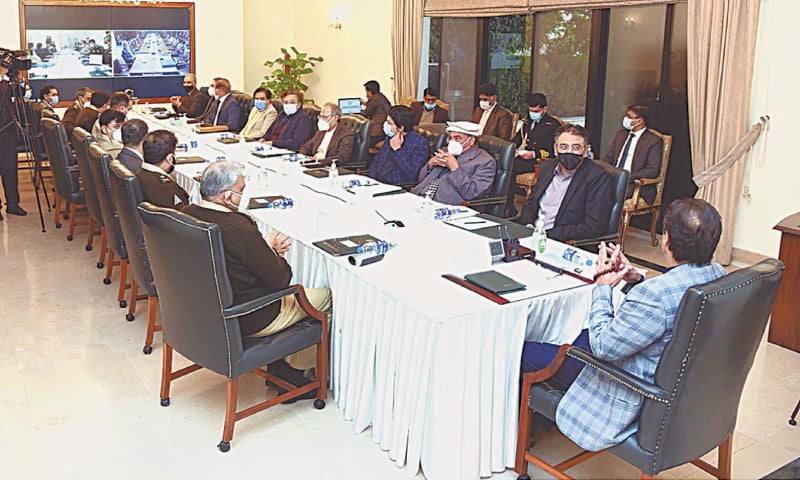 In a separate meeting, the prime minister directed the authorities concerned not to delay the provision of utility connections to new housing projects, especially electricity, as there was no power shortage in the country. The prime minister was also informed that 6,000 apartments were being constructed in Karachi under a project called Pakistan Quarters.

A meeting on the Karachi Transformation Plan presided over by the prime minister was informed that more than 100 projects had been planned under the KTP on which over Rs1.1 trillion would be spent.

The prime minister was informed that 100 development projects being executed under the KTP would be completed in three different phases.

Emphasizing the need for timely completion of development projects in Karachi, Mr. Khan said addressing the city’s civic problems on a permanent basis was quite imperative. He said illegal construction and encroachments along storm drains/nullahs were the main causes of floods in the city during every monsoon season. “However, people in such settlements must be provided alternative shelter before carrying out anti-encroachment operations there,” he said.

The prime minister directed a technical committee under the planning and development ministry to be constituted for the formulation of recommendations to upgrade the capacity and utility of the K-4 project for the supply of water to Karachi.

The prime minister had during a cabinet meeting on Tuesday observed that the KTP was moving at a snail’s pace.

Earlier, in a meeting of the National Coordination Committee (NCC) on Housing, Construction, and Development, the prime minister was informed that 6000 apartments were being constructed under the Pakistan Quarters project.

In the first phase, the construction of 700 housing units will start in the next three months with an estimated cost of Rs4 billion.

The housing and works secretary told the meeting that his ministry had auctioned five commercial plots for Rs13bn in Islamabad. He expressed the hope that construction activities on these plots would ensure Rs50bn investment and create 10,000 new jobs.

The prime minister directed the authorities concerned that there should not be any delay in the provision of utility connections to new housing projects, especially electricity. “There is no shortage of electricity in the country then what is the logic behind the delay in giving electricity connections,” he said, adding that the process of issuance of NOC for new connections should be made easy and simple to facilitate people.

Talking about house loans being offered by several banks, the prime minister said no additional financial burden should be exerted on the people seeking such loans so that they could have their dream house.

Mr. Khan directed the Federal Board of Revenue (FBR) chairman to facilitate overseas Pakistanis who were intending to invest in Pakistan. “Overseas Pakistanis are our asset and, therefore, all hurdles coming in the way of their investments should be removed,” he added.

In another meeting, the prime minister was informed that Netherland-based firm AWTEC wanted to make a $1.2bn investment to generate energy from solid waste in Karachi.

The firm is also taking interest in the Ravi urban project in Lahore as well as renewable energy projects. It will also transfer technology to Pakistan and open new avenues of jobs in the country.

The prime minister said a number of problems were confronting the local authorities due to the lack of waste disposal facilities. “Country’s water resources and coastal areas are worst affected by this [solid waste] and such projects will help establish housing facilities of international standard in the country,” he added.