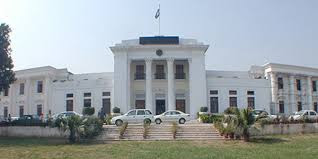 The house earlier resumed its session with a 15-point agenda.

A privilege motion was submitted by MPA Fazal Ilahi in which he blamed that Assistant Commissioner Rizwani Dar on December 19 removed all his inauguration boards in the Mattani area.

Sahibzada Sanaullah drew the attention of the Minister of Local Government that in Dir Upper and Dir Lower an Rs1.5 billion package for the road construction was approved in the past but all the schemes under the mentioned project in his constituency were incomplete due to the non-release of funds. He demanded the release of funds for these projects. Local Government Minister Akbar Ayub Khan assured that funds will be provided for the projects in question.

By the same token, JI MPA Inayatullah said that 715 levies and khasadar personnel from the tribal districts were removed from service on September 13, 2009, after which 500 were reinstated from time to time but 215 were still awaiting a decision. He demanded that government release their salaries and other allowances and those who have reached their retirement age, their relatives should be recruited in their place to help address their grievances.

Law Minister Sultan Muhammad Khan replied that these 215 personnel were those who had left their jobs during the peak militancy period in the former Fata but even then the current government was reinstating them on humanitarian grounds. He said a committee had been formed to decide the matter.

During the question-answer session, MPA Mir Kalam Wazir protested over the delay in IDP’s return to their areas. Law Minister on this occasion informed the house that these IDPs are paid Rs12,000 per month and around 6,664 families from Afghanistan have also returned and efforts were underway to bring the remaining ones back too.

He said that there were 2041 families in the Baka Khel Camp who were being facilitated but those who were in Afghanistan were not being paid any financial package because they were out of the country.

MPA Nighat Orakzai drew attention to the special persons and women quota during the recruitment process by different departments and said that the quota was not being fulfilled. Law Minister responded that in Agriculture Department special persons had been recruited against the quota. The speaker ordered that all departments recruit people against reserved seats and implement the quota policy fully.

Later the session of the assembly was adjourned till January 25.