Sindh Govt. must use Rs.700bn allocated for Karachi Asad Umar.

KARACHI: Federal Minister for Planning Asad Umar has urged the PPP-led Sindh government to utilize the Rs700 billion, which, according to him, has been allocated by the provincial government for development projects in Karachi. 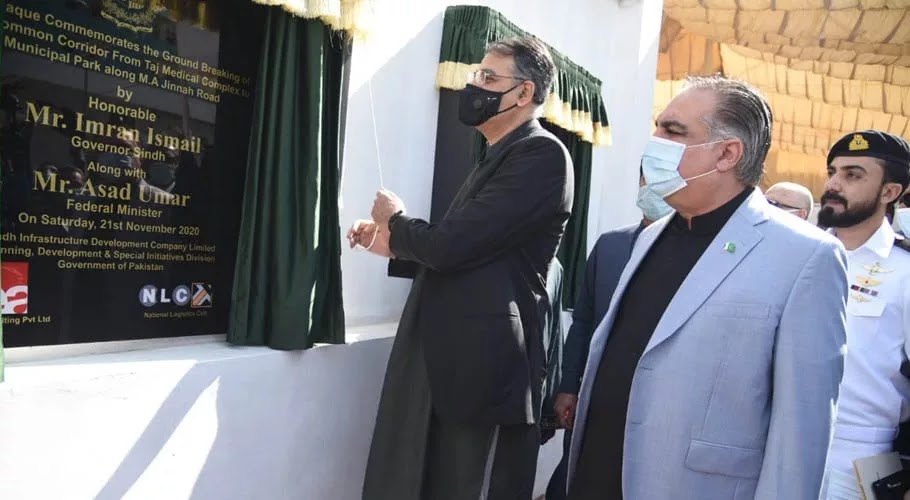 “No development work was undertaken in Karachi in the past but now work is underway on various projects, including the K-4, the Karachi Circular Railways (KCR), and cleaning of nullahs,” the planning minister said on Saturday.

Umar was talking to the media after unveiling the plaque for the groundbreaking of the Bus Rapid Transit (BRT) Common Corridor that stretches from the city’s Taj Medical Complex to Municipal Park along with one of the major thoroughfares of the city, MA Jinnah Road.

Speaking with reference to the Karachi Transformation Plan, the minister said: “good progress” is made on all the projects in Karachi for which the federal government is responsible.

“Work is underway on a fast pace on the K-4 project and two projects of railways – the KCR and the Freight Corridor that will run from Karachi Port to Pippri area,” he said.

Under the plan, around Rs572 billion were earmarked for the city’s mass transit system and rail and road transport systems. Rs267 billion were allocated for solid waste management, clearing stormwater drains, and the resettlement of people living in encroachments built on the city’s waterways.

However, according to a statement issued by the PPP chief Bilawal Bhutto Zardari whose party rules the Sindh province, out of the Rs1.1 trillion, the federal government was going to provide only Rs300 billion while the Sindh government had committed “more than Rs800 billion”.

Umar said work is also underway on the cleaning of drains in Karachi to permanently settle the problem of flooding after rains.

“Encroachments are being removed in the initial phase of the cleaning of nullahs for which the Sindh government has started work from Mehmoodabad area,” he said.

“As soon as the provincial government removes the encroachments around the major nullahs of the city, the federal government will start its work.”

Sindh Governor Imran Ismail said the BRT project is part of PM Imran Khan’s Karachi Transformation Plan, adding that the federal government is executing its projects in the city at a fast pace.

“The K-4 Water project has been handed over to the Water and Power Development Authority (Wapda). Wapda would soon present its report to the Prime Minister in this regard,” he added.

Ismail said the process to hire a consultant for the K-4 project has been completed and the K-4 would be a big water supply project that would help to cater to the water requirement of Karachi to a greater extent.

“The Green Line project has been long-awaited. After its completion, the Orange Line and Blue Line projects would be also launched,” he said.