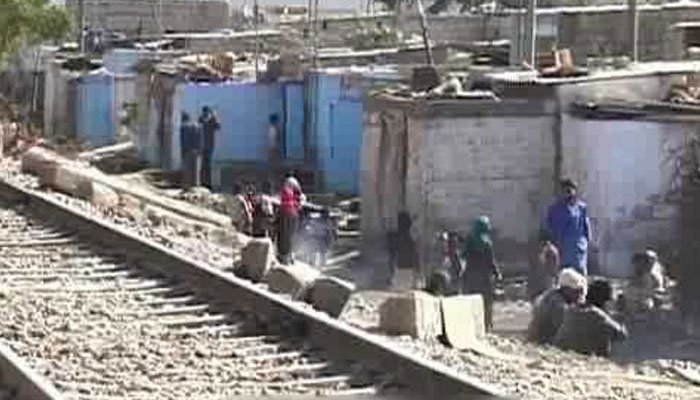 Karachi: The authorities concerned on Wednesday directed the residents of the city’s Gharibabad locality to vacate their homes; seeing as the structures had recently been declared illegal by the Supreme Court (SC), a news source reported.

RMC asked to share details on illegal buildings in Rawalpindi

As per the publication, the city railway station superintendent notified the people living along the Karachi Circular Railway (KCR) track to leave their homes in order to make way for the anti-encroachment drive – expected to commence from today onwards.

The notice also warned the residents not to resist the anti-encroachment operation executed by the Pakistan Railways along the KCR track. In response, the residents requested the provision of alternative residential spaces. They further stated that they had purchased the lands from the railways’ officials and could provide documents and receipts to prove their transactions.

On February 7, the top court had ordered the Pakistan Railways and the Sindh government to demolish encroachments built on the KCR track and restart the train service. To this effect, the officials concerned had demolished an under-construction building in Gulshan-e-Iqbal on February 12.

In a separate development, the Sindh Building Control Authority (SCBA) razed down an illegal wedding hall in Catholic Colony located in Jamshed Town. The Karachi Municipal Corporation (KMC) issued orders to 700 shops in Lea Market and directed the officials to demolish an illegal structure built inside a park in Kharadar.

previousPHATA to build over one million NPHP houses in Punjab
nextIMF, Pakistan agree to not introduce mini-budget

Crackdown planned against illegal plazas, shops in Sargodha. Sargodha: Sargodha Commissioner Dr. Farrukh Masood on Thursday directed the commissioners of all tehsils to launch a crackdown against all illegal commercial plazas and shops in the...
Read more